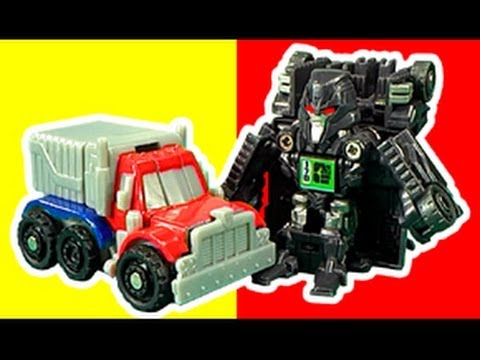 Transformers, robots in disguise!. Transformers Bot Shots is an action-figure-based game that involves small super-deformed auto-transforming figures with combat rules similar to “Rock, Paper, Scissors or 123” Players transform their Bot Shots figure into vehicle mode, send it into their opponent’s figure, and hopefully the collision will trigger a transformation into robot mode.

A three-sided rotating symbol in their chest (either a fist, a blaster, or a sword) put into place before the game by the player, is judged against the opponent’s pre-set symbol using the below hierarchy, determining the winner. A tad too complex for Leo..!

In the event of a draw, the figure’s individual power ranking determines the winner. If a figure does not transform, its owner loses by default. I found some characters have more trouble transforming than others..!

In this review I show single packs, 3 packs and the BL001 Optimus Prime with Trailer Launcher & BL002 Megatron with Tank Launcher. All toys will be given away to the FIRST person to type in the secret word within the video. The deal is you must be a video producer on YouTube as I would like you to review these toys as well. If your not a video producer the prize shifts to the next winner who is a video producer.