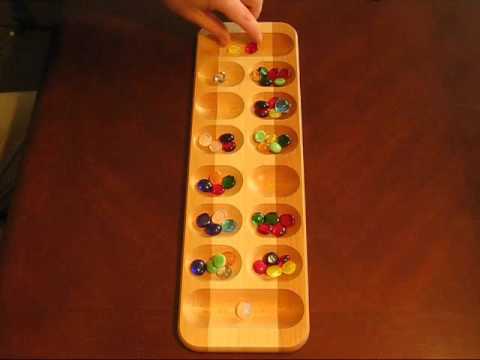 To start: Decide which player will play first by the flip of a coin. The first player picks up all of the marbles in one of the pockets on his side of the board. The player then proceeds by placing one marble at time in each of the succeeding pockets moving clockwise around the board. If the last marble is placed in either of the Wells, the player receives another turn. For example: Player A picks up 4 marbles from a pocket on his side and places them one at a time in the next succeeding pockets, ending in a Well thus receiving another turn. Play continues and alternates between players each time that the marbles do not finish in the Wells. Players may not touch the marbles to count them and once touching the marbles the player must play them.

To end play: Play ends when one players six pockets are empty.

More playing rules available and come with the game.

Many believe that Mancala could be the oldest game in the world. It is estimated to have been in existence for 7,000 years or more. The word Mancala means “to transfer” in Arabic. To transfer, or move, playing pieces from one bin to another is the exact premise of the game. There are literally hundreds of variations of the game. In almost every African nation some version of Mancala is played. This game is played by all ages (4 and up).